Flooded out – A homeowner from Bispham near Blackpool cannot fault her decision to call in expert help when she returned home from work to find the ground floor of her home completely flooded, back in the heavy rainwater that the Fylde Coast experienced on November 22 2017.

A scene of devastation greeted Valerie, when she opened her front door that evening. Even though she had seen people in nearby streets frantically moving cars, she did not expect to find her entire downstairs living and kitchen area under water and her dog trying to keep out of harm’s way.  She does not live in an area prone to flooding and had no idea how torrential rain could impact on her property.

Whilst seeing all of her ground floor furniture, possessions and kitchen fittings ruined was devastating, Valerie took up the advice provided by her electrician son, who told her to ring Aspray – a Lancashire-based property claims management company and loss assessor, which handles claims on behalf of both domestic and commercial property owners, across the UK.

Like many people, Valerie herself was unaware that an insured homeowner has the right to appoint their own loss assessor, to help them get back on their feet again in the way their insurance contract allows.  Following her call, Aspray’s loss assessor for Blackpool and Lancaster, Martin Grindrod, was quickly involved with her claim, making sure Valerie was not penalised by her insurer’s own representative on the spot, the loss adjuster.

With Martin’s help, Valerie was able to replace items lost in the flood and also organise all of the repairs and re-decoration around her schedule, as a shift-worker at Fox’s Biscuits.

Whilst she could have taken up an option to move out of her home during the repairs, this was not a possibility for Valerie, because of the temperament of her dog, which does not take well to strangers and unfamiliar places.  Again, the workmen took this situation into account, to make life as easy as possible for her.

Aspray’s approved contractors handled the repair works from start to finish, overseen by Martin, whilst Valerie continued to live in the house.  Having vetted workmen on board with her claim gave Valerie peace of mind. 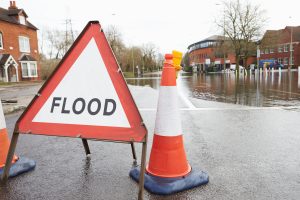 Additionally, Martin insisted that Valerie be allowed to replace her entire kitchen, and not have to try to match up new units with the old ones that had not been damaged.  She was also able to replace items and possessions which included her getting a new SKY box, complete with new dish.

At no stage did Valerie have to take time off work, take calls whilst at work, handle any of the negotiation with her insurer or their loss adjuster, or compromise on what she felt to be the right level of reinstatement for her home and personal effects.  All of this was left to Aspray to handle, as her appointed loss assessor.

This service was also provided at no cost to Valerie, because she was happy to use Aspray’s recommended contractors.

One unexpected bonus has been the speed with which everything went ahead. Whilst other houses in Valerie’s street were also flooded, her repairs were carried out and completed ahead of any other property owners, by some way.

Valerie says: “I cannot fault the service that Aspray provided.  Martin understood my situation and made sure the contractors worked in the way I needed them to work.  I didn’t lose any income as I didn’t need to take time off, had no contractor bills to pay, and had the stress of the claim taken away from me.  Touch wood nothing like this will happen to me again, but if it does, I shall immediately turn to Aspray.  They were brilliant!”

Not surprisingly, every rating Valerie provided on her Aspray evaluation form, which is given to all customers once the work is completed, was a five-out-of-five score.

Martin Grindrod, Aspray’s franchisee for Blackpool and Lancaster, says: “My role entails taking the stress out of a property insurance claim and ensuring that the insured homeowner, or commercial property owner, is treated fairly and given what they are entitled to under the terms of their insurance policy.  I am there to be the point of contact with the insurer, so my customer does not need to be bothered at work, or have to take lengthy calls from their insurer and their representatives in working hours, or out-of-hours”.

“Terms and conditions of insurance policies can be confusing for property owners and many fail to gain their full entitlement, because they are not sure what that is.  Many also believe the insurer’s loss adjuster will act on their behalf, but these people are actually there to minimise the cost of a claim for the insurer”.

“Home and commercial property owners need someone on their side, to ensure they do not lose out, have to accept second best when it comes to the reinstatement of their possessions, or put up with an unsatisfactory schedule of works and poor workmanship.  This is where the service that Aspray provides is invaluable, as Valerie Foulds has discovered.  Naturally, we are delighted with her feedback, as she makes all the points we would wish to communicate about our service very eloquently.”

More information about Aspray can be found at www.aspray.com whilst those wishing to follow the same career path as other loss assessors in the Aspray network can find details at www.asprayfranchise.co.uk